Corish Engineering, serving as the prime A/E’s DoD fuel facility engineering consultant, provided all mechanical fueling system engineering for the project. We recognized the need to address surge potential of the increased pumping rate through the 12,000' pipeline used for transferring fuel from bulk to the hydrant fueling system (not in original scope).  We performed the surge analysis.  To limit surge potential, we modified the pilot systems of the hydrant tank high level control valves and removed the receipt filter separator water slug shutoff feature. 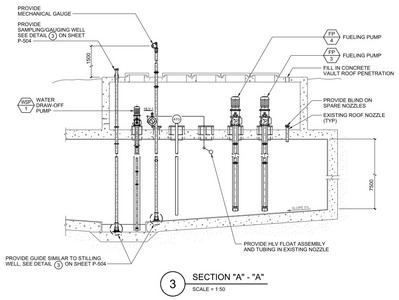 2. Detailed design to replace existing vertical filter separators with horizontal vessels meeting current criteria for suppling the refueler fill stands The existing product recovery tank and associated piping will be removed and a new 7600 liter (2000 gallon) double-walled PRT and piping will be provided. Non-compliant components at the fill stands are replaced and the control valves are downsized for improved surge control..

3.  Comprehensive analysis of all oil water separators in the fuel areas on the base. All fuel areas were surveyed for presence of oil/water separators. Each separator's function was determined and analyzed for possible modification or removal, to bring in compliance with current USAF policy and to simplify O&M. 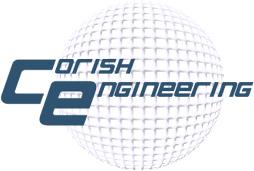